In case you hadn’t noticed, the Windows Store added something really special to its line-up not too long ago: its first Kinect applications. The ability to create Windows Store applications had been a longstanding request from the Kinect for Windows developer community, so we were very pleased to deliver this capability through the latest Kinect sensor and the public release of the Kinect for Windows software development kit (SDK) 2.0.

The ability to sell Kinect solutions through the Windows Store means that developers can reach a broad and heretofore untapped market of businesses and consumers, including those with an existing Kinect for Xbox One sensor and the Kinect Adapter for Windows. Here is a look at three of the first developers to have released Kinect apps to the Windows Store.

You wouldn’t think that Nayi Disha needs to broaden its market—the company’s innovative, Kinect-powered early education software is already in dozens of preschools and elementary schools in India and the United States. But Nayi Disha co-founder Kartik Aneja is a man on a mission: to bring Nayi Disha’s educational software to as many young learners as possible. “The Windows Store gives us an opportunity to reach beyond the institutional market and into the home market. What parent doesn’t want to help their child learn?” asks Aneja, somewhat rhetorically. In addition, deployment in the Windows Store could help Nayi Disha reach schools and daycare centers beyond those in the United States and India.

Parents and teachers who discover Nayi Disha in the Windows Store will be impressed by its creative approach to learning. Based on Howard Gardner’s widely acclaimed theory of multiple intelligences, Nayi Disha appeals to children who learn best through movement, music, and storytelling. Each lesson teaches an important skill, such as from learning to count and recognizing common foods. 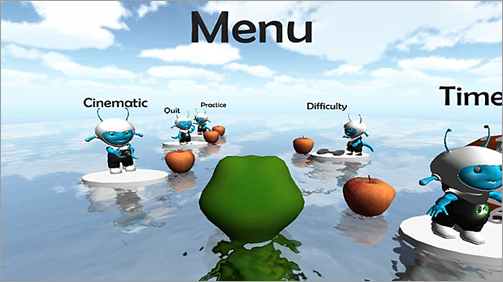 Comparisons with Kaju, available in the Windows Store, teaches children about number values.
Here, we see “Gator” swimming through the app’s main menu.

These lessons are imparted through stories featuring Kaju, a friendly space-traveling alien, whose adventures and misadventures get the kids up and moving—and learning. For example, in one story Kaju is ejected from his spaceship and lands on an interstellar number line. To return to the spacecraft, he must jump sequentially from digit to digit, until he reaches a specified number. But here’s the rub: Kaju only jumps if the kids jump and call out the correct numbers. This, of course, is where the Kinect sensor comes into play. The sensor sees the children jumping and hears them counting, and Kaju responds accordingly. Watching a roomful of preschoolers joyfully leap and count as they work to get their alien friend back to his space capsule, you can see how Nayi Disha makes learning fun. The youngsters are acquiring important skills, but all they know is they’re having fun. In fact, their identification with Kaju is so strong that one little girl referred to Aneja as “Kaju’s papa.”

YAKiT: bringing animation to the masses

It doesn’t take much to get Kyle Kesterson yakking about YAKiT—the co-founder and CEO of the Seattle-basedFreak’n Genius is justifiably proud of what his company has accomplished in fewer than three years. “We started with the idea of enabling anybody to create animated cartoons,” he explains. But then reality set in. “We had smart, creative, funny people,” he says, “but we didn’t have the technology that would allow an untrained person to make a fully animated cartoon. We came up with a really neat first product, which let users animate the mouth of a still photo, but it wasn’t the full-blown animation we had set our sights on.”

Then something wonderful happened. Freak’n Genius was accepted into a startup incubation program funded by Microsoft’s Kinect for Windows group, and the funny, creative people at YAKiT began working with the developer preview version of the Kinect v2 sensor.

Now, Freak’n Genius is poised to achieve its founders’ original mission: bringing the magic of full animation to just about anyone. Its Kinect-based technology takes what has been highly technical, time consuming, and expensive and makes it instant, free, and fun. The user simply chooses an on-screen character and animates it by standing in front of the Kinect v2 sensor and moving. With its precise skeletal tracking capabilities, the v2 sensor captures the “animator’s” every twitch, jump, and gesture, translating them into movements of the on-screen character. What’s more, with the ability to create Windows Store apps, Kinect v2 stands to bring Freak’n Genius’s full animation applications to countless new customers. 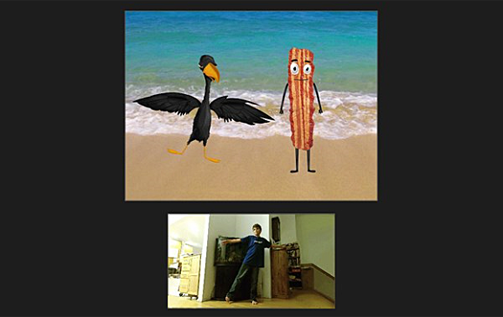 YAKiT’s Kinect-powered app makes it possible for anyone to create humorous animations in real time.

“When we tested the Kinect-based product with users, they loved it,” says Kesterson. “We had a couple of teenaged girls create animated foods—like apples and broccoli—for a school report on nutrition. They got so into the animation that soon they were making fruit-attacking zombies, and before we knew it, they were on the floor from laughing so hard. Their mother said to me ‘I’ve got to get this.’ That’s when I knew that we’d have a winner in the Windows Store.”

As any tech-savvy person knows, 3D printing holds enormous potential—from industry (think small-batch manufacturing) to medicine (imagine “bio-printing” of body parts) to agriculture (consider bio-printed beef). Not to mention its rapid emergence as source of home entertainment and amusement, as in the printing of 3D toys, gadgets, and gimcracks. It was with these capabilities in mind that, last year, Microsoft introduced the 3D Builder app, which allows users to make 3D prints easily from a Windows 8.1 PC.

Now, 3D Builder has taken things to the next level with the incorporation of the Kinect v2 sensor. “The v2 sensor generates gorgeous 3D meshes from the world around you,” says Kris Iverson, a principal software engineer in the Windows 3D Printing group. “It not only provides precise depth information, it captures full-color images of people, pets, and even entire rooms. And it scans in real scale, which can then be adjusted for output on a 3D printer.” 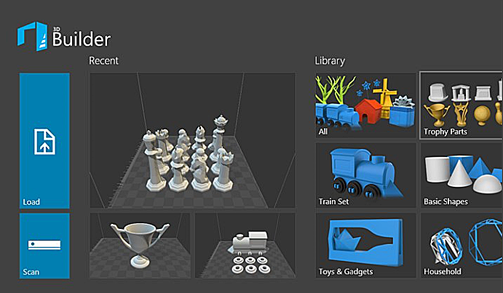 Beyond its scanning fidelity, the Kinect-enabled version of 3D Builder also lets users automatically refine and repair their 3D models prior to printing. In addition, it gives them to power to manipulate the print image, combining or deleting objects or slicing them into pieces. Users can see the reconstruction as it happens and revise it on the fly.

The Kinect-enabled version of 3D Builder is now available in the Windows Store, opening up the enhanced possibilities of three-dimensional printing to both home users and a wider audience of professionals. For home users, the app enables the creation of 3D portraits and gadgets that are more realistic. Hobbyists can print through their Windows 8.1 computer directly to their own 3D printer, or they can send the data via the cloud to 3D printing service. For professionals, most of whom will likely use cloud-based printing services, 3D Builder offers the potential to print in range of materials, including plastics, ceramics, and metals.

While home enthusiasts seem the most likely first adopters of the new app, the appeal to professionals is clear. For example, Iverson recounts an experience when he was showing 3D Builder at Maker Faire New York last year. An event planner asked him where she might get the app, which she mused would be perfect for creating 3D mementos at weddings and bar mitzvahs. To Iverson, this is just the tip of the iceberg. “The Kinect v2 version of 3D Builder and its availability in the Windows Store really puts the pieces together, making a complex technology super simple for anyone.”

Nayi Disha, YAKiT, and 3D Builder represent just a thin slice of the potential for Kinect apps in the Windows Store. Whether the apps are educational, entertainment, or tools, as in these three vignettes, or intended for healthcare, manufacturing, retailing, or other purposes, Kinect v2 and the Windows Store offer a new world of opportunity for both developers and users.

The Kinect for Windows Team