Today at Microsoft BUILD 2014, Microsoft made it official: the Kinect for Windows v2 sensor and SDK are coming this summer (northern hemisphere). With it, developers will be able to start creating Windows Store apps with Kinect for the first time. The ability to build such apps has been a frequent request from the developer community. We are delighted that it’s now on the immediate horizon—with the ability for developers to start developing this summer and to commercially deploy their solutions and make their apps available to Windows Store customers later this summer.

The ability to create Windows Store apps with Kinect for Windows not only fulfills a dream of our developer community, it also marks an important step forward in Microsoft’s vision of providing a unified development platform across Windows devices, from phones to tablets to laptops and beyond. Moreover, access to the Windows Store opens a whole new marketplace for business and consumer experiences created with Kinect for Windows.

The Kinect for Windows v2 has been re-engineered with major enhancements in color fidelity, video definition, field of view, depth perception, and skeletal tracking. In other words, the v2 sensor offers greater overall precision, improved responsiveness, and intuitive capabilities that will accelerate your development of voice and gesture experiences.

Specifically, the Kinect for Windows v2 includes 1080p HD video, which allows for crisp, high-quality augmented scenarios; a wider field of view, which means that users can stand closer to the sensor—making it possible to use the sensor in smaller rooms; improved skeletal tracking, which opens up even better scenarios for health and fitness apps and educational solutions; and new active infrared detection, which provides better facial tracking and gesture detection, even in low-light situations.

The Kinect for Windows v2 SDK brings the sensor’s new capabilities to life:

Developers who have been part of the Kinect for Windows v2 Developer Preview program praise the new sensor’s capabilities, which take natural, human computing to the next level. We are in awe and humbled by what they’ve already been able to create.

Technologists from a few participating companies are on hand at BUILD, showing off the apps they have created by using the Kinect for Windows v2. See what two of them, Freak’n Genius and Reflexion Health, have already been able to achieve, and learn more about these companies.

The v2 sensor and SDK dramatically enhance the world of gesture and voice control that were pioneered in the original Kinect for Windows, opening up new ways for developers to create applications that transform how businesses and consumers interact with computers. If you’re using the original Kinect for Windows to develop natural voice- and gesture-based solutions, you know how intuitive and powerful this interaction paradigm can be. And if you haven’t yet explored the possibilities of building natural applications, what are you waiting for? Join us as we continue to make technology easier to use and more intuitive for everyone.

The Kinect for Windows Team 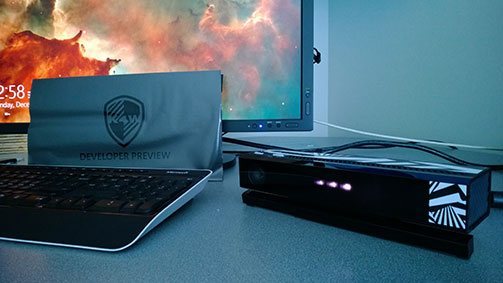